This land of erupting geysers, glaciers and waterfalls is a real playground for adventure. Its impressive landscapes are an inspiration for artists and photographers.

Iceland is the country with the lowest population density in all of Europe, with a pure, pristine and, in some way, magical landscape.

Iceland offers the traveler a wide range of experiences that you can visit when you visit the country. Each time of year has its unique atmosphere and there are always opportunities to experience new things, discover beauty and marvel at the freshness and colors of nature. Every moment has its charm and will leave you with endless memories.

Iceland has a volcanic origin. This is demonstrated by the presence of lava fields, craters, volcanoes, mesa mountains, pumice mountains and volcanic ash extensions.
For centuries, glaciers, erosion, and tectonic movements have shaped the landscape. Large rivers have formed, with endless waterfalls of all kinds. There are so many that not all waterfalls have a name.
10 percent of Iceland is covered by glaciers, magnificent and endless ice worlds. They move and change a little each year, sometimes growing, in cold distances; sometimes, as in recent years, declining. Glaciers move forward, dragging soil, sand, and rocks, but can also recede again. This can lead to lakes with floating ice floes. There are quite a few of this type in Iceland, the most spectacular being the Jökulsárlón glacial lagoon in the Southeast. It is part of the new Vatnajökull National Park, around the glacier, the largest protected natural area in Europe. 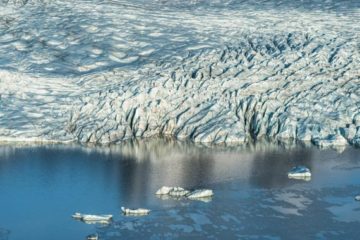 In autumn the streams and rivers, overflowing with meltwater, rush to the lowlands, feeding the land and ultimately the ocean. The gifts of nature are welcome everywhere. Green vegetation turns red, yellow or brown, producing landscapes of magnificent color. It's no wonder that photographers consider fall the most attractive time, with all its different shades of colors and changing skies. In autumn, the horses and sheep that have been grazing in the mountains are taken to the inhabited areas for their annual collection. They are lively and interesting events in which visitors can participate.

Winter is a time of amazing contrasts. The placid snow accentuates the black lava fields, with a magical result. At night, suddenly, the blackness of the sky is interrupted by flashes of light that flicker and dance across the firmament in green, white, or red: the northern lights often appear in cold, clear weather. One can imagine that the snow storms and winds that sometimes sweep the country are fighting for a great prize, but they always lose the battle: soon after, everything returns to calm and the land resurfaces fresh, as if reborn.

Spring is the time when the sun rises higher and higher in the sky, warming the earth and all living things. The grass turns light green and migratory birds return, making this the perfect time for birdwatching. More than 200 species nest in Iceland and some in large numbers. For example, there are literally millions of puffins, and in many places it is possible to get very close to them. The inhabitants of the island delight in the new life that emerges in the spring.

The extreme darkness of the Icelandic winter has a few advantages. Between September and April, Iceland enjoys a wonderful display of nature: the Northern Lights. Named after the Roman goddess of dawn, Aurora, and the Greek name for the north wind, Boreas, this phenomenon is one of the most spectacular in nature.
Those responsible for the northern lights are the particles of the sun that are released when a solar explosion occurs. When these particles interact with the atmosphere in Earth's magnetic field, energy is released, causing the sky to light up in a wide variety of colors.